Born in Stuttgart in 1968, Svenja Kreh is based in Köln and Berlin. Kreh studied at the Kunstakademie Düsseldorf where she worked with the Swiss painter, Alfono Hüppi. Kreh has had a number of solo exhibitions in Germany and has been included in many group shows. Kreh has received awards from the Columbus Art Foundation, the Eduard Bargheer Stipend and the Deutscher Kunstfonds, Kulturestiftung des Bundes. In addition, she was an artist in residence in Etaneno, Namibia.

Kreh is a painter and drawer who moves seamlessly between the two. Her work has evolved but not in a clear linear way. Instead, it has morphed and mutated over the years though always retaining the same essential essence while, at the same time, continuing her dialogue with the world vis-à-vis philosophy, film, pop culture.

Beginning with her early, enormous panels from 2003, Svenja’s work conflates rebellion with dystopia and religion or, rather, the sacred. Her work has shifted from giant panels consisting of various images to more recent, smaller works on paper made entirely in greys and blacks and whites of dystopian portals and/or religious imagery from early German painters. What all these works share in common is a refusal to compress, condense or otherwise simplify. Instead, Kreh’s work insists on complications, on positing opposites. Rather than offering the viewer easy digestible imagery, Kreh’s work asks that the viewer deeply consider.

Svenja Kreh, Across a Billion Years.

Svenja Kreh, Paradise They will Have It. 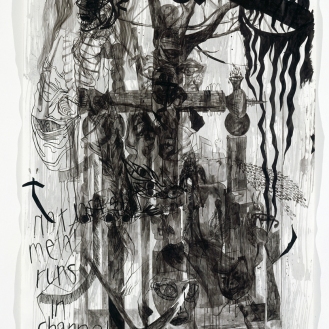